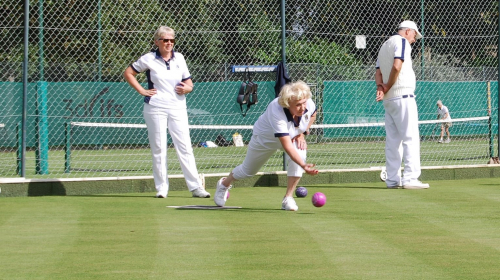 On the weekend of 5th & 6th September the Bowls section of Warwick Boat Club held the finals of their internal competitions. Because of the disruptions caused by the coronavirus no trophies were awarded. This did not stop the players from taking the matches seriously.
The saying that a game of bowls is never over until the last bowl has come to rest was never so true as the three games played on the Saturday. Comebacks made in all three games.

The Ladies pairs was contested between Jacqui Ashley & Mary Wheildon and the mother and daughter pairing of Ellie & Chris Hurst. The former took a 9-0 lead after 5 ends but the latter had pulled the score back to 9-9 after 11 ends. Then on the 12th end with a bowl from each side touching the jack a drawn end was declared. So with 6 ends to go it was all square. Jacqui and Mary pulled away again and they were 4 shots ahead after 15 ends but Ellie & Chris hit back with a three. Each pair scored one on the last two ends which resulted in Jacqui and Mary being the winners by one shot

The Mixed Pairs Final involved Celia Bellamy & Peter Lamb and Diane Harvey & Peter Boardman. Celia and Peter L got off to a roaring start and at the half-way stage  were leading 20 – 1. The spectators were astounded and must have been wondering what the final score was likely to be. But the game then swung in favour of Diane and  Peter B. and won the second nine 17 – 1. Definitely a game of two halves, the win going to Celia & Peter L 21 – 17.

The Men’s 4 Woods Final was another excellent match between the 2019 Champion David Hurst and the wiley John Labrum rolling back the years with some great bowling. David got off to quick start with a 3 and a single but John replied with a couple of twos and David led 6 – 4 after six ends. It was then that David gradually pulled away to lead 15 – 6 after 13 ends. On the 14th end David was holding three after playing all his bowls, it looked all over, but John managed to place his last bowl next to the jack to take the end. He then scored 10 over the next five ends to take the lead 17 – 15. David is not an  easy person to beat and took the lead 19 – 17. John retaliated  taking the next two ends to lead 20 – 19. Could John win his seventh title?
The answer was – no, as David took a three on the 25th end to win 22 – 20!

Sunday morning arrived for two more finals. The green had been freshly mown and looked in great condition. So the scene was set.

The Ladies 2 woods had Jacqui Ashley and Celia Bellamy as the contestants. This was a tight match with Jacqui leading for most of the time by 3 after 2 ends and then by four after 15 ends (12 – 8). Celia continually scored to stay in the game and eventually took the lead 13 – 12 after eighteen ends. Jacqui leveled the scores in the next end, so it was 13 apiece with two ends to go. In the penultimate end Jacqui was holding shot when Celia’s second bowl trailed the jack for two. Jacqui now needed two to force an extra end but could only manage one. So Celia won the final 15 – 14.
The Men’s pairs involved last year’s winners Peter Lamb & Peter Gawthorpe (luckily drawn together again) being challenged by David Hurst & Dave Miller. The Peters won the first end but were not to have much joy for the next hour or so as they were losing 17 – 3 after 11 ends. Now for the fourth comeback of the weekend. Amazingly with one end to go they pulled level!! Spectators and players were all now biting their fingernails. So to the eighteenth and last end. The Peters were being a bit heavy and most of their bowls were past the jack, the Davids must have been holding shot for they seemed to be  building a wall to protect their position. David H’s third bowl sprung the jack into the open. ‘We’re holding five’ shouts Peter L ‘possibly six’. The tension rises another notch with the two skips having one bowl each. Peter G sends his bowl down the rink, but it is outside the line and drifts off into the next rink – dead. David H keeps his nerve and his bowl  comes to rest inside the jack to win the game 18 – 17.

An enjoyable finals weekend with great bowling and close scores. All the winners were presented with special ‘ Bowls Covid-19’ mugs.