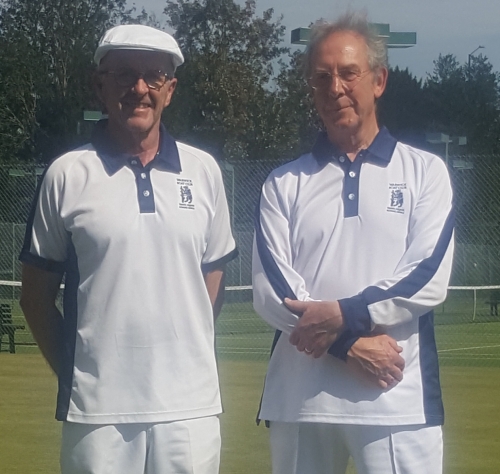 We woke on Day 2 to more sunshine and blue skies. There were three finals to be contested today. Ladies 2-woods and then the Blue Riband events Ladies and Gents 4-woods.

Just before midday Vivienne Griffin and Chris Hurst took to the green for their final. Marker, Colin Harris, was soon in action on his hands and knees with two metre measuring stick and standard measure to check out a rather loose head. First blood to Vivienne. Both players were struggling with the lines on the unusual set-up of rink 2 and the hard, fast green. Vivienne adapted first and gradually pulled away with the odd flurry of resistance from Chris. With the score at 15 - 6 with four ends to pay Chris conceded and Vivienne had won her second title of the weekend.

So, after a short break the four gladiators (Jacqui Ashley/Margaret Lawson and Les Anscombe/David Hurst) took their places to battle it out, side by side on adjacent rinks for their respective prizes. The Ladies on rink 3 started quickly and Margaret soon took a 4 - 1 lead. Meanwhile, on rink 2 the Men started more slowly. Like the previous match, they too were struggling with the pace of the green and bowls were constantly dropping into the ditch. David began to creep ahead and Les appeared to be struggling in the heat.

Back on rink 3 the ladies continued to exchange blows. Jacqui pulling back the deficit and finally taking the lead. After 14 ends the ladies took a ten minute drinks break while the men continued on in the rising heat.The score being 16 - 9 it looked as if Les's dominance in this competition was to end.

Then the impossible happened. Les found his second wind, he was not to give up his crown A three! without a fight. A three - and the score was 16 - 16.

The tension was building both on and off the green, some spectators were constantly checking their smartphones to check the England (aka Rest of the World) cricket score.

On the 23rd end Jacqui had reached 20 at the same time as David reached the same score in his game. Could brother and sister win their titles within seconds of one another? All of a sudden there was a cheer, England had won the Test Match, Jacqui scored a two to win her match but Les scored a single to prolong the gents final at 20 - 20!!

It wa sudden death time. The nerves were showing as the first two or three bowls were very loose. Then David placed a bowl near the jack which Les could not shift. Victory was David's 21 - 20.

Two splendid matches, both worthy of being finals and congratulations to all four competitors for their display in the high temperatures. We must not forget the two markers, Martin and Sandra Dean, who also suffered in the heat.

Thank you, also to Diane Harvey who was called on a few times in her role as Umpire over the weekend.

Ladies Captain, Di Wood summed up the day by saying ' The only losers were the ones who did not attend.'

For the record, earlier in the week Peter Gawthorpe and Peter Lamb beat David Hurst and David Carson to win the Men's Pairs.