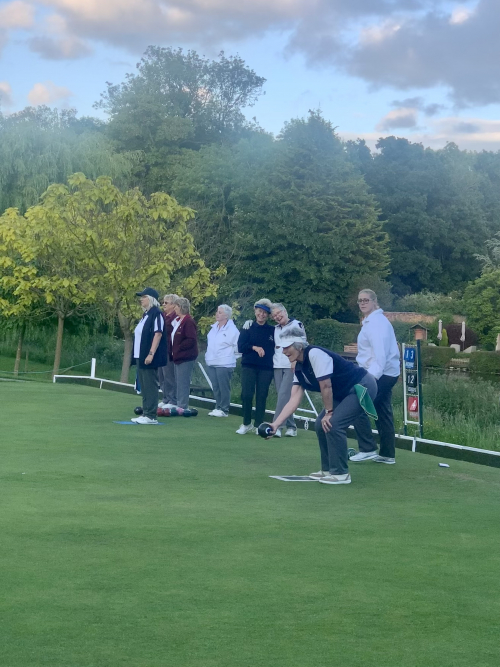 After the teams magnificent victory over last years winners Welford, our ladies faced Whitnash at home last Wednesday. We all knew this would be no 'walk in the park' despite home advantage, with Whitnash having a number of experienced County and one England player within their ranks.

The Top Club consists of four diciplines, singles, pairs, a triple and a four, all four matches being played concurrently. Success on three rinks would constitute a win with the overall shots total only coming into play should the match be drawn with two winning rinks each.

Despite a light shower just before the start of the match, the evening stayed fine through play and the team were encouraged by a contingent of supportive bowls members who came to cheer their team on.

Our singles player jacqui Ashley faced Whitnash and England bowler Kirsty Richards and knew that she would need to play to the very best of her ability if she was to triumph. This she did with a resounding win, beating her opponent 21 - 1.

Encouraged by the singles success the remaining members of the tean dug deep and we were rewearded with wins on the other three rinks. The pair of Chris Hurst and Di Harvey won convincingly 19 -9, whilst in the triples match Whitnash conceeded to Celia Bellamy, Di Wood and Skip Mary Wheildon after 14 ends deeming the score of 26 - 11 unassailable. Our opponents in the fours did likewise losing 23 - 4 to Annette King, Val Rushton, Margaret Lawson and skip Ginny Burns after 16 ends.